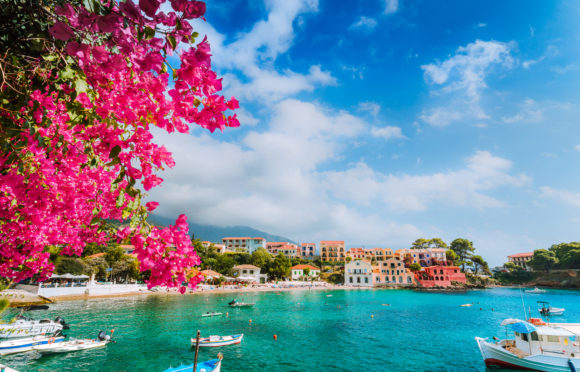 It’s 6.40am and the newly-risen sun spreads its golden rays on a group of seven young men and women in shorts, matching blue shirts and caps on the relatively empty but beautiful Ammes Beach in Svoronata on the Greek island of Kefalonia.

The only other people in sight are three early morning swimmers, cutting through amazingly clear water.

Back on the beach, one group member gently digs deep, carefully scooping out handful after handful of sand. Others watch the enlarging gap as if on a quest for hidden treasure, they strike gold.

But this bounty is ultra-special because it’s an egg, an endangered Loggerhead sea turtle egg, lodged in the cooler sand, deep underground but only a metre or so from the edge of the Ionian Sea.

We stop our pre-breakfast, walk to watch. It’s just the first of many eggs they uncover…

Earlier on, that group of volunteer nature conservationists combed the beach looking for tell-tale trail signs that female turtles had scrambled onshore to lay eggs.

It’s like watching a TV nature documentary in HD!

Soon, 300 of these treasured eggs are carefully removed, delicately transferred to a quartet of new nests – all man-made – crucially located 10 metres further up the beach.

It can take up to 90 days for eggs to hatch and moving them reduces risks of damage before baby turtles hatch and head to sea under cover of darkness.

It served as a reminder of just how special Kefalonia has become as a tourist destination.

Its popularity is primarily down to a book and a movie about a love story.

The film’s portrayal of this intensely picturesque island, the Ionian Sea’s largest, catapulted its natural beauty to the world’s attention.

High on many Kefalonia itineraries is a trip to Antisamos Beach where many of the film scenes were shot. It doesn’t disappoint. If pretty beaches are your thing, visit Myrtos Beach, too.

Kefalonia’s population stands at less than 40,000, so tourism plays a huge part in the local economy.

Drive around the coastline, the golden beaches, towering cliffs and rugged mountains and some of the 365 villages and you begin to understand Kefalonia’s popularity.

Thyme-infused cliffside walks are a pleasant assault on your senses. We opted to stay in Svoronata, 7km from the island’s capital Argostoli.

Svoronata is aptly described as “sleepy”, ideal for a much-needed break away.

Alongside a handful of hotels and apartment blocks are several restaurants with superb outlooks, perfect for viewing spectacular sunsets, and there are pretty beaches within easy walking distance.

Another advantage of Svoronata is the quick transfer time, less than 15 minutes from the island’s airport.

Other highlights of our stay included a day trip – by coach and boat – to the isle’s northern-most tip and the fishing village of Fiskardo.

Locals claim A-listers such as Madonna and Tom Hanks are often seen dining in high season in little harbourside restaurants.

But another star of this island was the stylish, traditional fishing village of Agia Efimia.

Housing some first-class eateries, the Spathis Art Café is a true winner in my book. Its home-baked orange pie was mouth-watering.

Savouring the stunning views and mouthfuls of delicious cake I totally appreciated why Captain Corelli was truly captivated by this Greek island.

P.S. One of Kefalonia’s hidden gems is literally underground and well worth the long walkway to the magical Lake Melissani. The cave’s opening, more than 100 feet above, allows the sun rays to hit the lake, creating what’s cleverly billed as “50 shades of turquoise”. Be prepared to queue for the boat – we waited 45 minutes.

Factfile: We flew from Glasgow with Jet2.com and stayed in the family-run Hotel Sotiris. Sightseeing done via a mix of local bus travel and organised tours. Temperatures May-October are 23C-36C.