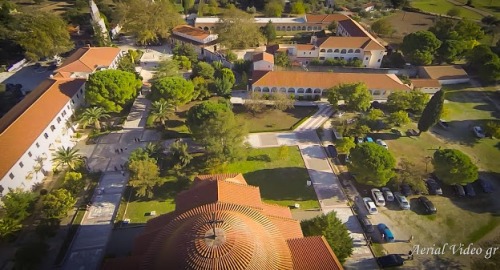 In 1560, Saint Gerasimos arrived in Omala, Cephalonia, where he restored the chapel of the Assumption of Theotokos, while at the same time he founded a coenobitic monastery with a numerous brotherhood, which he named “New Jerusalem”.

On October 20, 1582, the second exhumation of the saint’s holy relics took place, which thenceforth remains incorruptible and fragrant to be venerated and sanctify the believers.

The saint’s body is dressed in burial vestments and it is exposed for veneration in a glazed reliquary which is incorporated in a bigger, silver, artful shrine, placed on top of the saint’s grave. In the church, the hermitage of the saint is also saved, where someone can go down with a ladder three meters long and which is separated by a narrow hole into “two rooms”.

In the holy monastery are saved three big trees which the saint planted, three wells and 37 smaller ones which were opened by his hands for the benefit of the dry land as well as two threshing floors he constructed, where he worked in order to get the necessary for the monastery. The new beautiful church of the saint was inaugurated by the late Archbishop Seraphim of Athens on July 19, 1992. 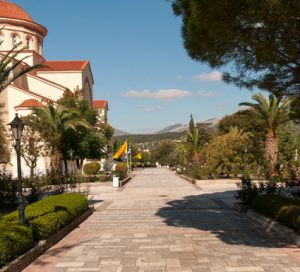 From the year of the monastery foundation until today, the Divine Liturgy is being conducted every day from 3.00 am to 7.00 am. Saint Gerasimos monastery celebrates many times throughout the year: On August 16 (the Falling Asleep of the Saint) and on August 23 (leavetaking of the feast). Between the two celebrations, an established hebdomad of episcopal divine liturgies, services and sermons takes place.

Moreover, on October 20, feast of the translation of St. Gerasimos’s incorrupt body, and on October 26, leavetaking of the translation, the saint is set up and carried in a thronged and triumphant procession; a similar procession takes place on Holy Saturday and subsequently the saint is installed in front of the beautiful gates until the Sunday of St. Thomas, when a Festive Episcopal Divine Liturgy is conducted. 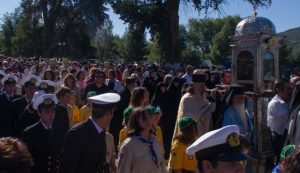 The nuns of the monastery work in icon painting and hospitality, since the monastery has hostels for pilgrims. Moreover, they have developed significant charitable and missionary activity. The church services are regularly performed and the monastery observes the typikon of Saint Savvas monastery in Jerusalem.