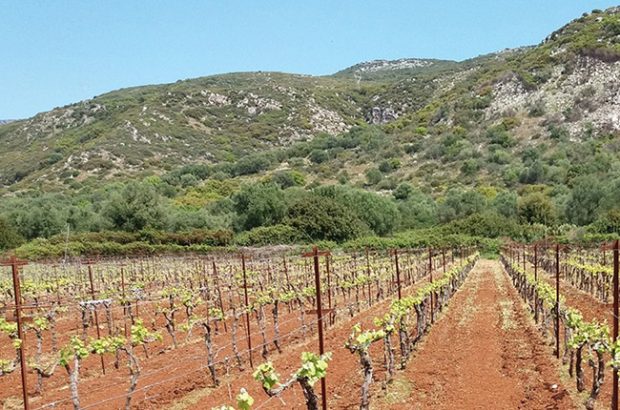 With exciting wines made from native grapes, pay a visit to these Cephalonia wineries, also known as Kefalonia, chosen by Yiannis Karakasis MW…

Staying near Argostoli is a strategic choice as it offers flexibility and easier access to most locations, along with access to two wine routes.

The first, which is also the longest, starts in Argostoli and climbs up to the Monastery of Agios Gerasimos on the plateau of Omala, at the heart of the Robola vineyards.

Melissinos-Petrakopoulos Winery
From there, you can take the road to the Mt Aenos National Park with its unique black fir trees and pay a visit to the Melissinos-Petrakopoulos Winery in Thiramonas. This artisanal winery set up by entrepreneur Nikos Petrakopoulos aims to produce terroir-driven wines, with a production of not more than 25,000 bottles. A fascinating range of three Robolas and two Mavrodaphnes showcases the complete array of flavours and textures these varieties can create. The complex pre-phylloxera Mavrodaphne is particularly worth tasting.

Gentilini Winery & Vineyard
Return to Argostoli via Minies and the Gentilini Winery & Vineyards. Founded in 1984, Gentilini is now run by second-generation Marianna Kosmetatos and her husband Petros Markantonatos, both spirited contributors to the development of the region. The winery organises detailed wine tours and produces an engaging range of wines including the mineral Wild Paths Robola and a dense, velvety Mavrodaphne.

Sclavos Wines
The second, and shorter, wine route tours Paliki, near Lixouri. Here esoteric producer Evriviadis Sclavos of Sclavos Wines has embraced biodynamics and natural winemaking, crafting characterful wines, which need time in the glass to blossom. His Synodos blend of Mavrodaphne and Vostilidi is scented and poised, with firm structure; while the hard-to-pronounce Metageitnion is a singular synthesis of 100-year-old Vostilidi vines. Also try his simply brilliant Vino di Sasso Robola.

Foivos
Another producer worth visiting in Paliki is Foivos, where they vinify wines in amphorae, have experimented with ageing wines under water and have a wine museum.

Whichever route you choose, you’ll discover that Cephalonia is a stunning destination, offering beautiful beaches, fresh seafood and some of the best wines in Greece.

The popular time to visit is summer but, as with most of Greece, it’s best to avoid mid-August when the island can be crowded. Instead choose June, early July or, even better, September.

Yiannis Karakasis MW is a specialist in Greek wines. He publishes www.karakasis.mw.
This first appeared as part of a travel guide in the June 2018 issue of Decanter.